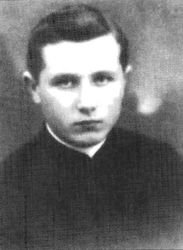 28 August 1909 — born in Rezekne (Rēzekne) County, Bikava Parish of Gaigalava Municipality;
1928 – 1933  — studied in Riga Catholic Seminary in (University of Theology);
25 May 1933 — consecrated as a priest at St. James’ Cathedral in Riga;
27 August 1933 - June 1934 — vicar in Rezekne Parish, served also as a priest in Jaunborne Parish for a while;
5 June 1934 - 1 February 1937 — priest in Sprukti Parish (established a new parish and supervised church construction works);
5 February 1941 - 23 March 1941 — priest of Viski Parish;
23 March 1941 — arrested and committed to prison in Daugavpils;
24 June 1941 — murdered after brutal torture shortly before the Bolsheviks retreated. Buried in Viski Church garden.
11 September 1991 — the Higher Court of the Soviet Republic of Latvia revoked the judgment issued on 21 June 1941 by the Military Tribunal of the Baltic Special Military District under Sections 58 – 4, 17 – 58 – 9, 58 – 10 of the Criminal Code of the Russian Soviet Federative Socialist Republic on “assistance to the international bourgeoisie, solicitation for sabotage, counter-revolutionary agitation and propaganda” conducted by Fr. Vladislavs Litaunieks, punishing him with the highest measure of punishment — shooting with confiscation of all property.
On 11 September 1991, a rehabilitation certificate was also issued to confirm that the accusations made were false and that the executed death penalty was unlawful.

At the beginning of 1941, when Latvia had already lost its independence after the occupation by the Soviet power, A. Springovics (A. Springovičs), archbishop of Riga, appointed a young and active priest — Vladislavs Litaunieks (Litavnieks, Lītaunieks, Lītaunīks, Litovniks) — to Viski Parish. Until then, Fr. Vladislavs Litaunieks had been working in many churches and schools in Latgale (Nagli (Nagļi), Rezekne, Jaunborne, Sprukti, Indra, Viski, Kraslava (Krāslava)), and, under his supervision, new churches were constructed and old ones were completed.
Vladislavs Litaunieks was just like the other priests of the new generation of Latvia then; he was nationalist in his nature, active and hard-working, he set the example for border area residents and they trusted him. The new priest was also a chaplain for the home guards of Latvia[1] at the border, he was a member of the home guard organisation and participated in the Union of the Catholic Youth (this is one of the instances mentioned in the accusation); his brother Bronislavs (Broņislavs) served in the Army of Latvia. The young priest was highly respected and loved for his integrity. He is remembered especially warmly by those who were children, whom he taught religion in several schools in Latgale. Fr. Litaunieks was an incredibly talented orator. His voice was beautiful and captivating. Everyone who knew him, would never forget him.
The new Communist power disapproved of Vladislavs Litaunieks and his activities, including his calls to disobey the Soviet power (e. g., agitation against the non-democratic[2] elections of 1940), and his trust in Christ, and therefore KGB (Committee for State Security)[3] chose him as their victim and decided to kill him. Some people recall that V. Litaunieks was not afraid and that he continued his service as a priest (burial of the deceased, celebration of Holy Masses, Christian education of children and the youth, helping persons pursued by the occupying power, organising  religious gatherings, keeping up communication with the believers and other priests) despite facing the threat of death. He knew the fate he could expect, but he remained true to his Christian faith and kept serving as a priest.
The sermon of Fr. Vladislavs Litaunieks in Kraslava Church on 4 July 1940 during the Feast of St. Donat in Kraslava is considered to be one of the main reasons for his arrest. The eyewitnesses testified that the church was overcrowded, and people even stood in the church square. The main sermon of the festival was entrusted to Fr. Vladislavs Litaunieks, and he said: “Let them crucify me! Let them pursue me! I will never renounce my creed, my religion, my faith!” Everything Father said meant that he was a danger to the Soviet power, which actively repressed faith and believers. People worried about his courageous expression, because they knew about the potential consequences. Loud-speakers had been set up in the field. The entire Kraslava Town listened to his speech. In the meantime, workers went on a demonstration and sang revolutionary songs with their fists raised. Everyone talked about this sermon, because they worried about the priest’s fate and because they respected and loved him so much.

It was the last straw. Now only the cause for the arrest was missing, i. e., the “violation”. The “case” was built and Father was accused of burning down the nationalised Parish house in Indra (however, everyone knew that it was burnt by the Bolsheviks themselves). This accusation served as the reson to arrest the priest.
On 23 March 1941, Fr. Vladislavs Litaunieks went by train to Feimani (Feimaņi) Parish to help its priest Kazimirs Strods manage Lenten retreats. Father did not suspect that he was followed by several KGB officers who had been watching him. They followed him to Viski Railway Station to detain him on the train, murder him and make him appear missing. KGB officers had been applying such methods since the 1917 revolution in Russia and in other countries.
On the train, KGB officers detained Fr. Litaunieks and removed him from the train at the next stop in Ardava (Ārdava), where a KGB lorry (commonly referred to as Black Bertha) from the prison of Daugavpils was waiting for them. KGB officers did not expect that their evil deeds would have eyewitnesses who understood what was going on. Passengers of the train included several believers who knew Fr. Litaunieks, and they saw KGB officers brutally pushing Father off the train, hitting him while he was down on the ground but after they got into the lorry, the beating got more violent and the priest received several bad punches to the face. This is the information provided by witnesses.

The attempts of his relatives and the members of his parish to visit the priest in prison failed. Some members of the parish, including the teacher Marija Svede (Marija Švēde), dared to request his release from prison. Unfortunately, they had to pay for this with their lives. At the beginning of the war, M. Svede was taken to the prison in Krasnoyarsk, where on 7 February 1942, the Special Meeting of USSR NKVD sentenced her to death and executed the sentence in the same place on 6 March.
On 21 June 1941 in Daugavpils prison, Fr. Vladislavs Litaunieks was sentenced to death and the confiscation of all property for “high treason” and “counter-revolutionary” activity. The accusations listed “evidence” fabricated by the Communists themselves, i. e., burning down the Parish house in Balbinova (Indra), counter-revolutionary sermons, participation in the Union of the Catholic Youth,  communication with believers and other priests and other similar allegations. Although five days had been granted to appeal the death penalty, the priest was shot on 24 June 1941.
Father Litaunieks was brutally tortured before pronouncing the death sentence and also until the execution of the death penalty, in order to obtain his signed confession. The priest Vladislavs Litaunieks was shot in his back. His arms were handcuffed. His contemporaries recall that the handcuffs were made of plaited barbed wire.
After the German Army entered Daugavpils in 1941, a mass grave of 11 victims was found in the prison courtyard, and there was also the terribly mutilated body of Fr. Vladislavs Litaunieks. Contemporaries recalled that his limbs were broken, he had a barbed wire crown around his head, shapes of crosses had been carved in his chest and back while he was still alive, nails were inserted under his fingernails, etc. A brother could recognise his brother only by his clothes and shoes...
Members of Viski Parish buried him in the garden of their church.
Viski Parish did not have their own priest for almost half a year; they mourned him and the believers put the chasuble of Fr.on the altar and prayed together.

[1] A paramilitary, patriotic organisation of volunteers in Latvia (1919-1940). It helped public authorities to maintain order and safety.

[2] The elections took place on 14-15 July 1940. Only one list created by the occupying power was involved. Results of the elections were announced even before the voting stations had closed.

[3] A repressive structure established to suppress the opponents of the Soviet power. KGB also implemented extensive repression against the Church, priests and believers. During the years of Soviet occupation, more than 80 Catholic priests were repressed in Latvia, and at least 14 of them were killed. In 1941, six priests were murdered, and several of them, Fr.V. Litaunieks included, were tortured especially mercilessly before they were murdered.